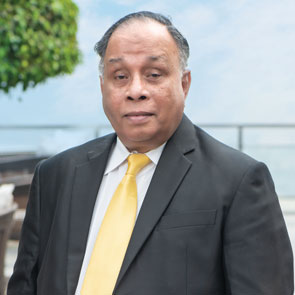 A.K.M. Iftekhar Ahmad is a carrier insurer. After obtaining graduation from Dhaka University he joined the eastern Head Office of erstwhile Muslim Insurance Co. Ltd. on 8 January 1969. Thereafter he joined erstwhile Janata Insurance Co. fully owned by Bengali entrepreneurs in September 1970 as Asstt. Manager. After liberation the Insurance Industry was nationalized. He was absorbed in Sadharan Bima Corporation as Asstt. Manager in 1973. He held important positions in Underwriting, Claims, Branch and other departments till 1996 when he voluntarily retired to join the private sector. In Private Sector he was the CEO of Eastern Insurance Co. Ltd. from 1998 to 2009 and CEO of Sonarbangla Insurance Co. Ltd from 2010 to 2012. He retired from Sonarbangla on attaining the age of superannuation ie. 67 years. Thereafter he joined Insurance Development and Regulatory Authority (IDRA) in July 2013 as Senior Consultant and worked there till June 2016. He was also Member Secretary of Central Rating committee, During his tenure Money Insurance Policy (MIP) was designed by the secretariat and approved by the Authority. He also piloted many new products for non-life insurance viz: Nibedita Comprehensive Insurance for Women, GD Health Insurance, Prime Health Insurance Hajj & Umrah Insurance, Niramay Micro Health Insurance, Weather Index Crop Insurance, Mass Health Insurance, Probashi Insurance for migrant workers, through Central Rating Committee and approved by IDRA. He received
extensive training on insurance in home and abroad at various stages of his carrier. He was a member of Central Rating Committee from 2000 to 2012 and also Chairman of Misc Rating Subcommittee for one term. He played an active role in product design and pricing of non-life Insurance. He was an elected member of the Executive Committee of Bangladesh Insurance Association from 2002 to 2008 and played vital role in shaping the industry. He joined GDIC on 4th August 2016 and working as Consultant looking after Underwriting and Claims of the company.