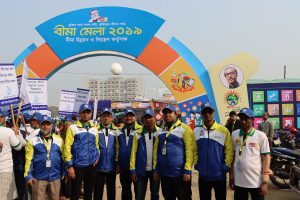 [Dhaka, 26th January 2020] Green Delta Insurance Company (GDIC) has won the first prize for the best stall in non-life category for the third time in the row at Bima Mela.

Green Delta Insurance (GDIC) participated in the fourth ‘Bima Mela’ held in Khulna on January 24 and 25, organized by the Insurance Development and Regulation Authority (IDRA) and the financial institution division of the Ministry of Finance.

The opening ceremony of the two-day insurance fair was held at Khulna Circuit House ground on the afternoon of January 24. The fair was open to all from 9 am to 9 pm. Moreover, the two-day fair had a beautiful cultural program every evening.

Begum Mannujan Sufian, Khulna-3 constituency MP and the current State Minister of Labour and Employment, inaugurated the fair being the Chief Guest of the event. Sheikh Salahuddin Jewel, Member of Parliament of Khulna-2 seat, Senior Secretary of the Financial Institutions Division, Md. Asadul Islam and Khulna Divisional Commissioner, and Dr. Md. Anwar Hossain Howlader were also present on the occasion.

In addition to the stalls of other insurance companies, Green Delta Insurance was also present at the fair. Free consultancy to resolve various complaints or problems related to insurance was provided from their stall.

“Like every year, we are here on this year at ‘Bima Mela 2019’ to spread the protection and safety of insurance to our countrymen of Khulna, with the best in class services of the country through multiple platforms. We will keep on our endeavors in the future to ensure insurance for all,” said Md. Moniruzzaman Khan, Head of Digital Business and Head of Brands & Communication, GDIC.

The closing ceremony of the insurance fair began at 4 pm on January 25. On the occasion, Khulna City Corporation Mayor, Talukder Abdul Khalek was present as the Chief Guest under the Chairmanship of Shafiqur Rahman Patwari, IDRA chairman.

Green Delta Insurance Company Limited (GDIC) is one of the leading private non-life insurance companies in Bangladesh. GDIC was incorporated on 14 December 1985 as a public limited company, under the Companies’ Act 1913 and its operation started on 1st January 1986, with a paid-up capital of BDT 3 crore.