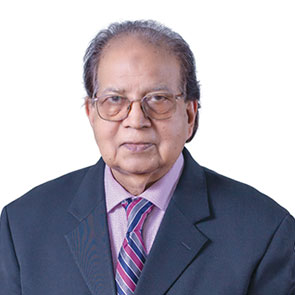 Hafiz Choudhury is a founder trustee of Independent University, Bangladesh (lUB) and served as its Honorary Treasurer for more than 8 years. He is a member of the Governing and Academic Council of IUB. He was Chairman of the Finance Committee of IUB for number of years and was elected Chairman of the Founding Trust of IUB for one year term. He was also Chairman of Business Advisory Service Centre, a USAID-funded organization set-up to support development of private business enterprises. He was a Director in the Board of Dhaka Electric Supply Company Limited for over nine years and Titas Gas Transmission and Distribution Co. Ltd. for over six years. He served as Director in the Board of JibanBima Corporation and Rupali Bank Ltd. for number of years and a Director of the Federation of Bangladesh Chamber of Commerce and Industries.
He had been serving as Honorary Treasurer of United Nations Association of Bangladesh since 1976 and currently holding the position of Vice President. He was nominated Conciliator for Centre for Settlement of Investment Disputes (lCSID), an affiliate of World Bank based in Washington, USA, Hafiz Choudhury has held many important positions including Director in the Board of Bangladesh Bank for more than three and a half years, an Executive Committee member of Metropolitan Chamber of Commerce and Industry (MCCI) for number of years and served as Chairman of its various committees and was also elected Vice President for two terms. He was elected President of MCCI in 2009.He is currently serving as an Independent Director and Chairman of Green Delta Insurance Co. Ltd. And also as an Independent Director in the Boards of ICB Islamic Bank Ltd. and Chairman of Risk Management Committee and Internal Control and Compliance Committee of the Bank. He is a Shareholder Director of New Zealand Dairy Products Bangladesh Ltd.

He is married to Rasheda K. Choudhury and they have two sons and daughter. Eldest son M. Sami Hafiz has done his MBA from Taxas State University, USA and is now working in Canada. Their second son Dr. Jami Hafiz Ph.D is working as a Scientist in a Nano Industrial Company in USA. Two of his research products have been patented by the US Government Patent Office where he has been named as inventor of those patents. Their daughter Fariah Hafiz is currently working in JP Morgan & Co., Newyork Office as a managing Director, Investment Banking. He is a widely travelled man and has travelled to many countries of Asia, Europe, Africa and USA, Canada and Maxico.